Most people who are currently involved in polishing bare metal airplanes, as well as those who are considering doing so, are aware that two types of buffers are generally recommended. First is the 7 inch, variable speed, disc buffer and second is the dual head orbital Cyclo buffer. Purchasing one of each is certainly a good first step, but there is a large array of other items you are likely to need. After polishing a good sized all metal airplane for a number of years, my list of appropriate items to have on hand when it is polishing time has grown substantially. During a recent visit to the hangar, I photographed the items I typically use. I will provide brief explanations of how and why I have these particular items on hand.

A stainless steel table with wheels will keep everything off the floor and will also keep you from having to constantly bend over.  The stainless steel is easy to keep clean and provides an ideal work space when positioning the polishing cloths on the Cyclo buffer. 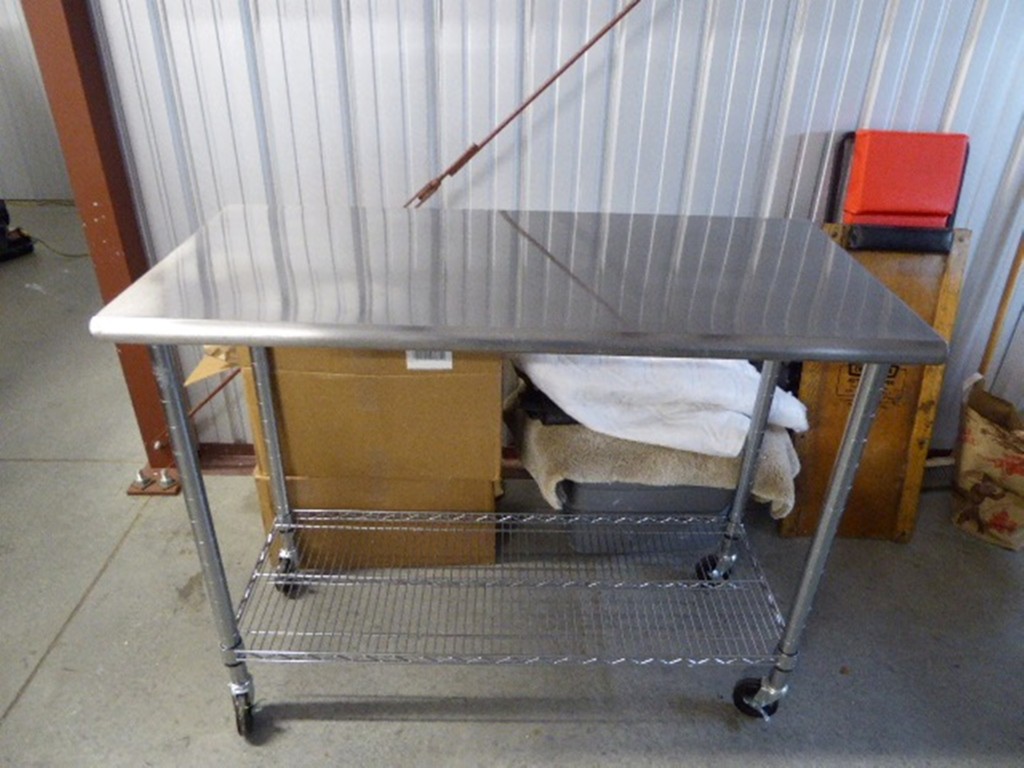 A variable speed 7 inch disc buffer is normally used with the coarser grades of polish. It is typically used with a wool buffing pad.  Note there are two in the picture.  You cannot use the same wool pad for more than one grade of polish so you have a choice of constantly changing and keeping track of which pad you are using or using one buffer and pad for one grade of polish and a different buffer and pad for a different grade.  I intentionally selected two slightly different styles of buffers to minimize the confusion. 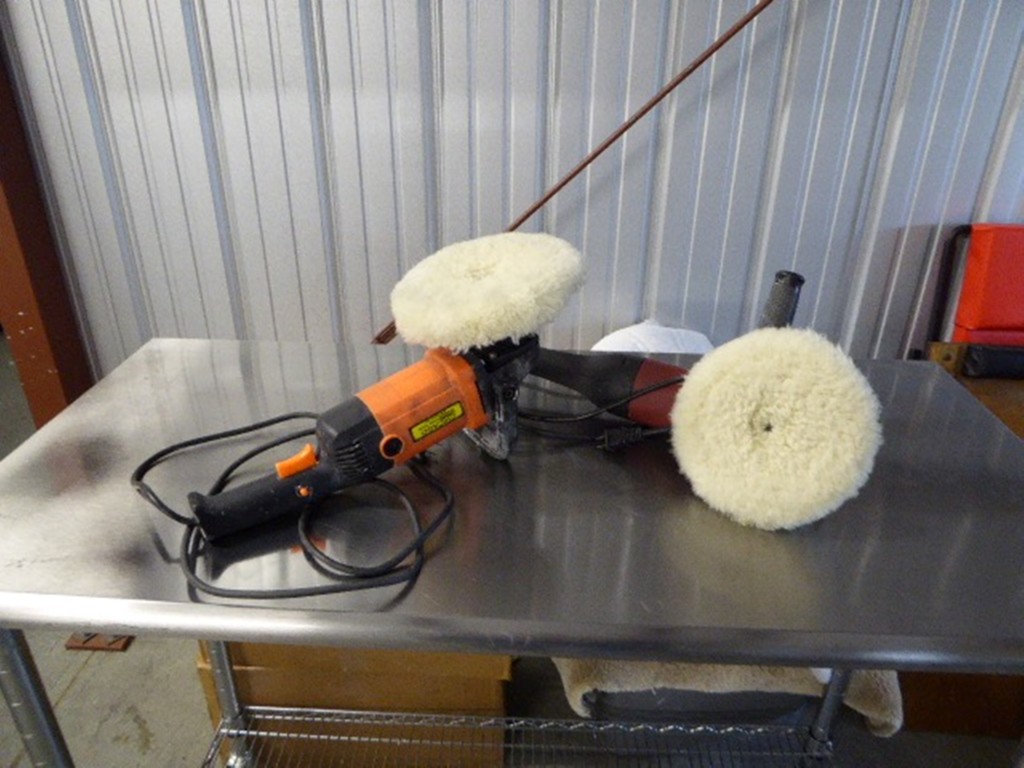 You need to think of buffing pads as consumables.  Not only do they wear out, they get to the point where they are so black and gritty, they become ineffective.  A spur wheel helps in keeping them clean and it is possible to wash them, but once washed, they are never like they were when new.  Although they are not cheap, it is good practice to buy in bulk so you don’t come up short in the middle of a polishing job.  I always keep at least a dozen on hand. 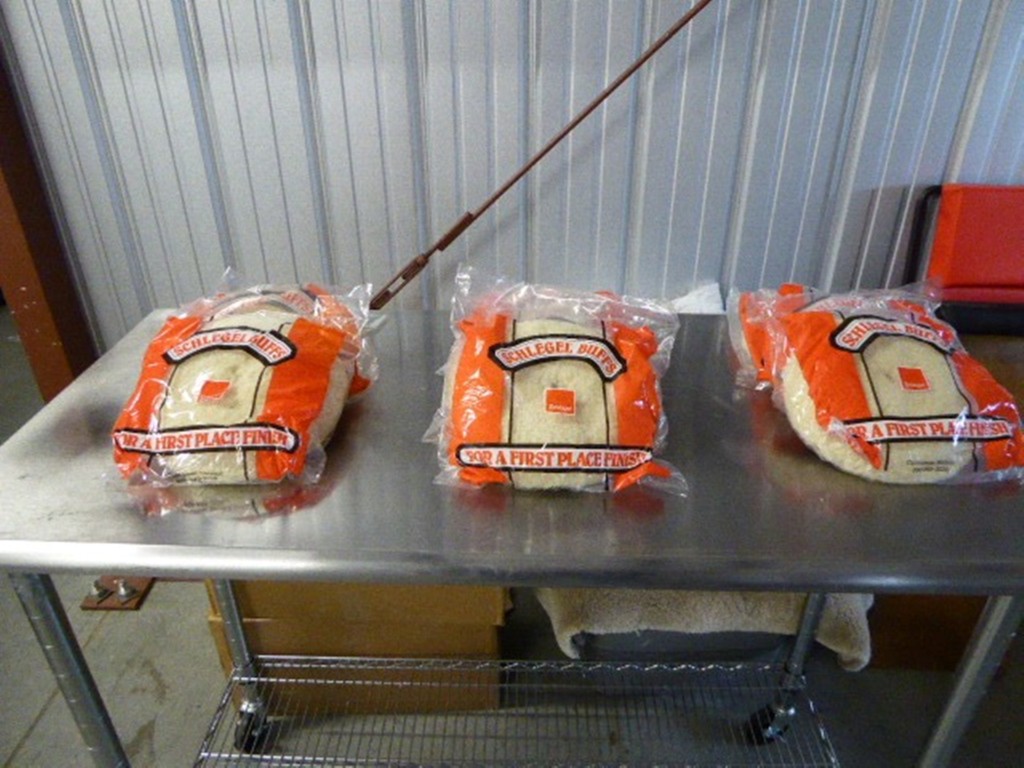 The Cyclo buffer is the “go to” tool in achieving a high degree of brilliance. While it is normally used in the final steps of the polishing process, it can be used with a “middle” grade of polish. When used with the fleece polishing cloths, they tend to get a bit warm during use.  As such, many polishers have more than one Cyclo and they switch between them during extended polishing sessions. 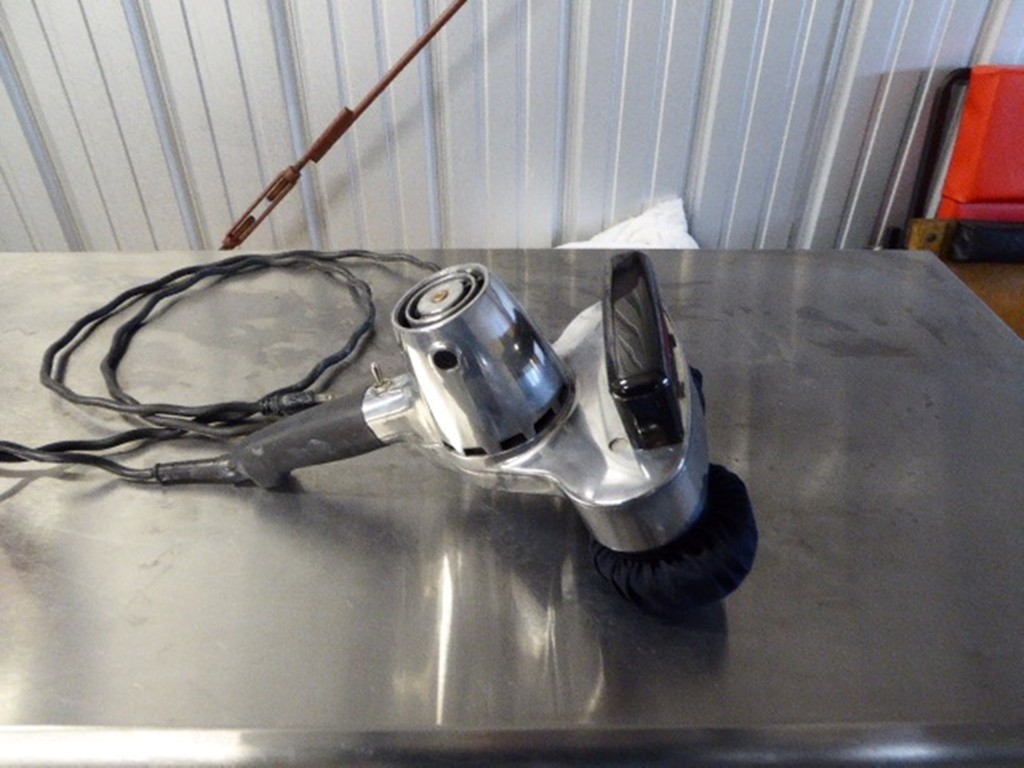 Depending on where you purchase a Cyclo, it may or may not come with a couple of necessary accessories.  Three essential accessories are adapters that enable the attachment of foam pads, the foam pads themselves and the covers for the overall pad assemblies.  Although none of these pieces ever touch the polish or the airplane, they are consumables and need to be periodically replaced.  As was the case with the wool buffing pads, it is advisable to keep a good supply of these items on  hand. 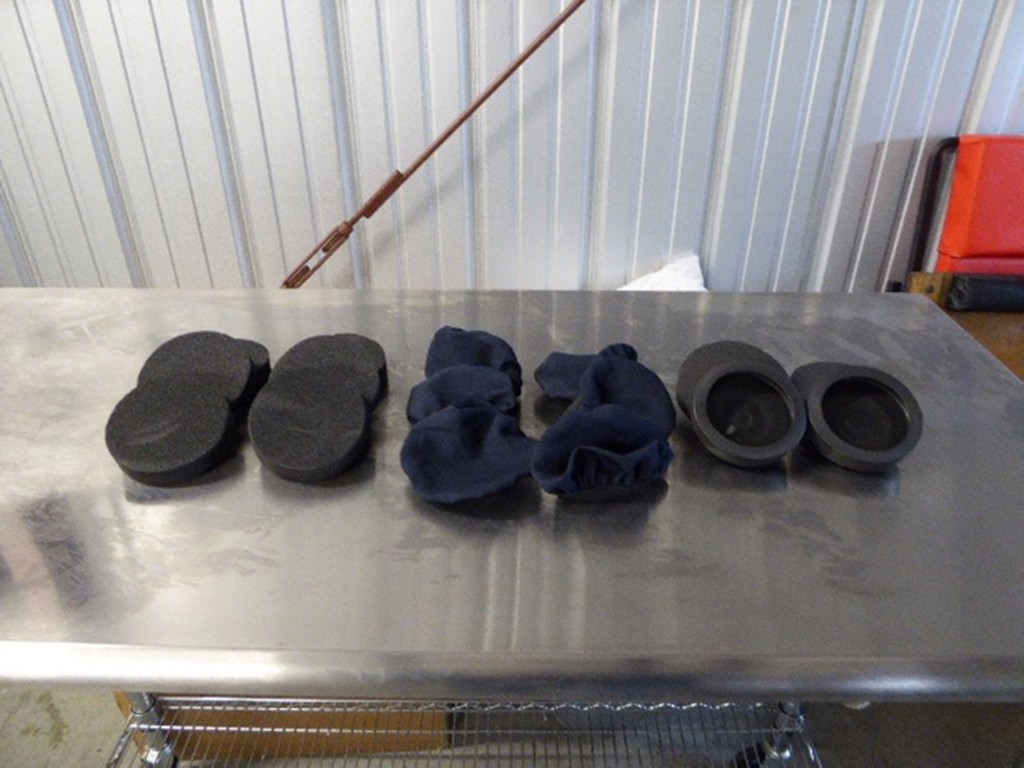 To actually do any polishing with the Cyclo, you need polishing cloths that can be attached to the buffer.  I prefer the ones that have slots cut in them, which makes positioning and attachment much easier.  Like most of the items necessary for achieving a quality polish job, these specialized items are somewhat expensive.  I always keep a fairly large supply on hand. 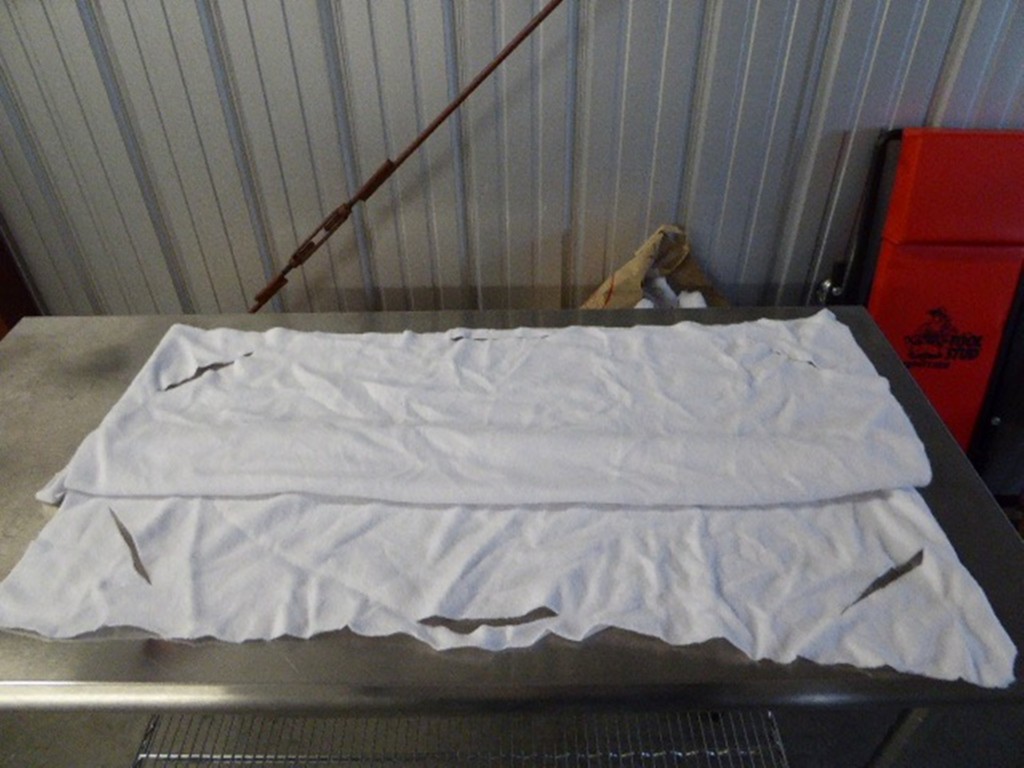 This shows the Cyclo with the polishing cloth mounted. 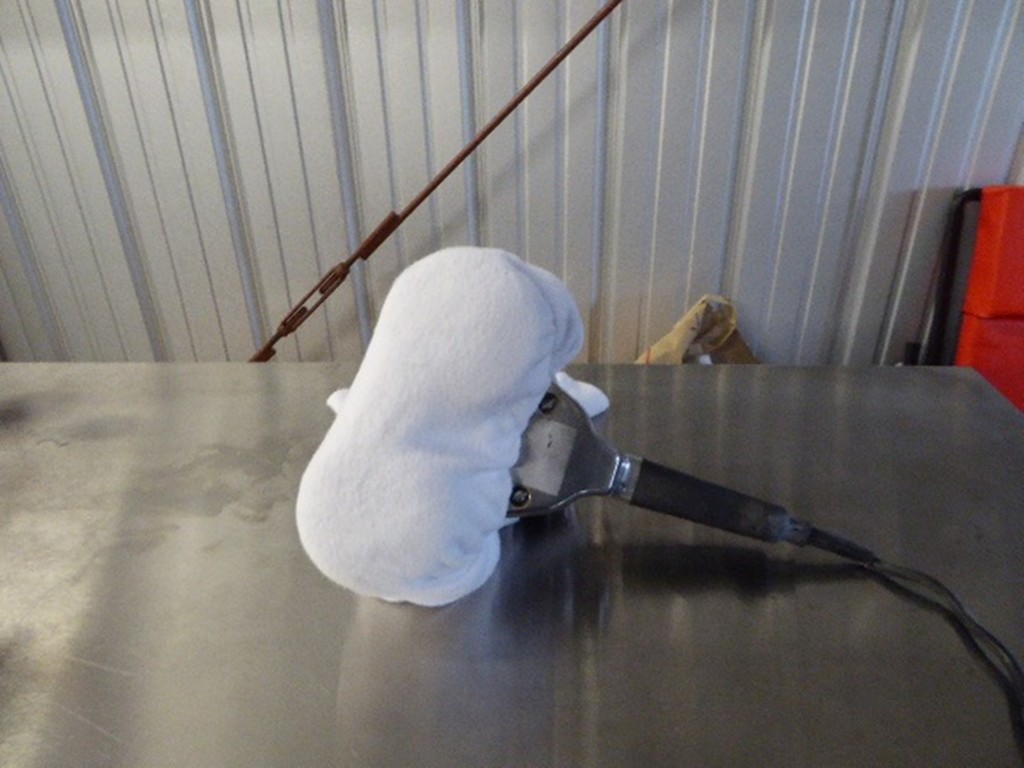 Both the disc buffer and the Cyclo are somewhat heavy and can be difficult to use in awkward locations. If the awkward locations are in highly visible areas, I find a way to make those two buffers work. However, it the areas in question are hidden from sight, such as the bottom of the flaps, I use two more manageable buffers.  They are definitely not as fast or effective, but they do work well in specific situations.  These are 6 inch orbital buffers and note that I have two of them.  One has a wool pad and the other a terry cloth pad.  For a given grade of polish, the wool pad will have a better cutting capability and the terry cloth pad will have a better polishing capability.  I typically use the wool pad first and then follow up with the terry cloth pad. 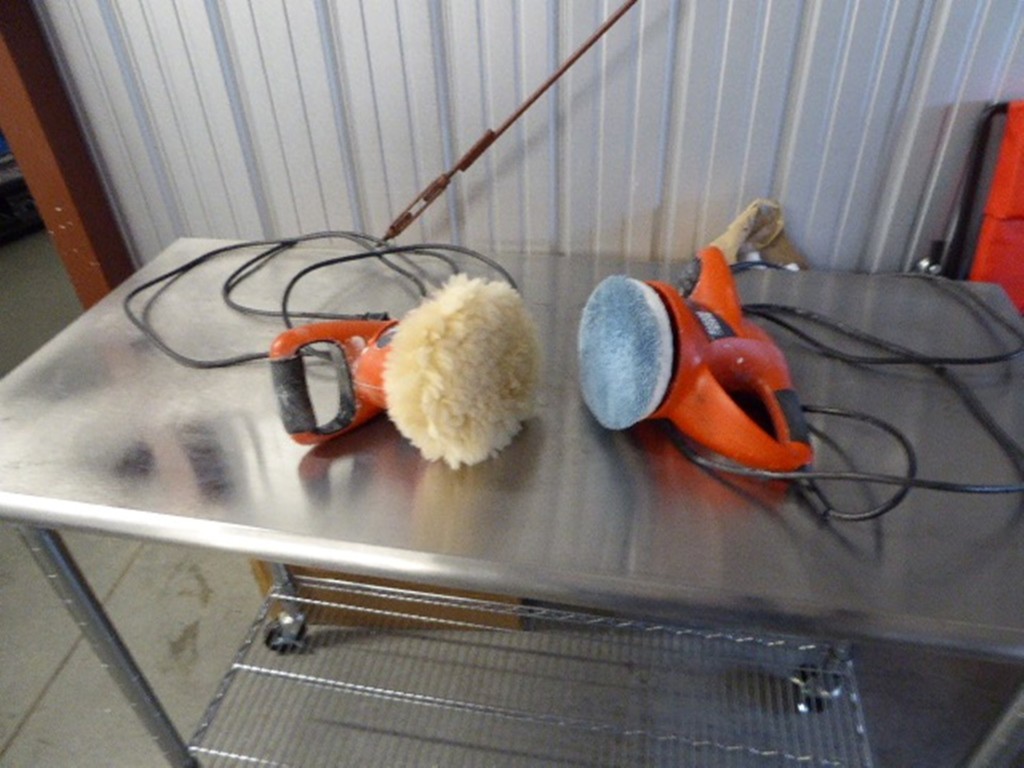 As with everything else, I keep a large supply of pads for these buffers on hand. 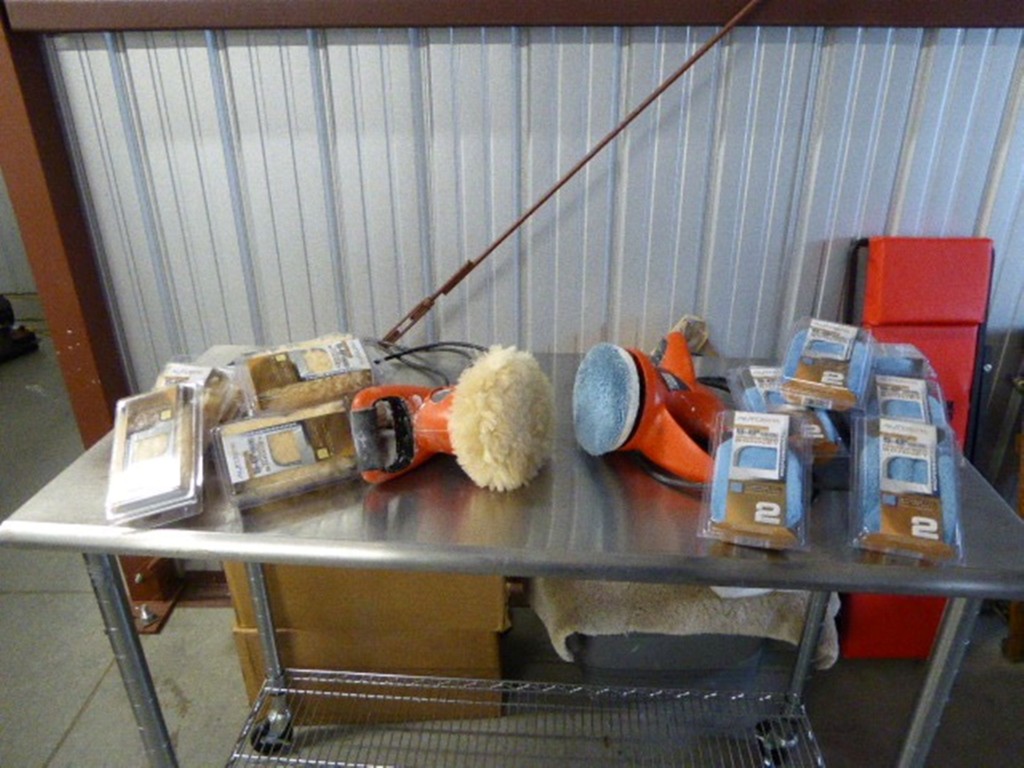 None of the above buffers work particularly well where there are concave surfaces or 90 degree angles, such as where the horizontal stabilizer meets the fuselage.  This is either because of the awkwardness of the buffer or the size of the buffing heads.  I recently added a new buffer to the mix to deal with these situations.  It is a small unit made by Rupees that can accommodate either 3 inch or 4 inch polishing bonnets.  I’m still experimenting with it, but preliminary results are promising. I’m also experimenting with using foam discs for this particular buffer. 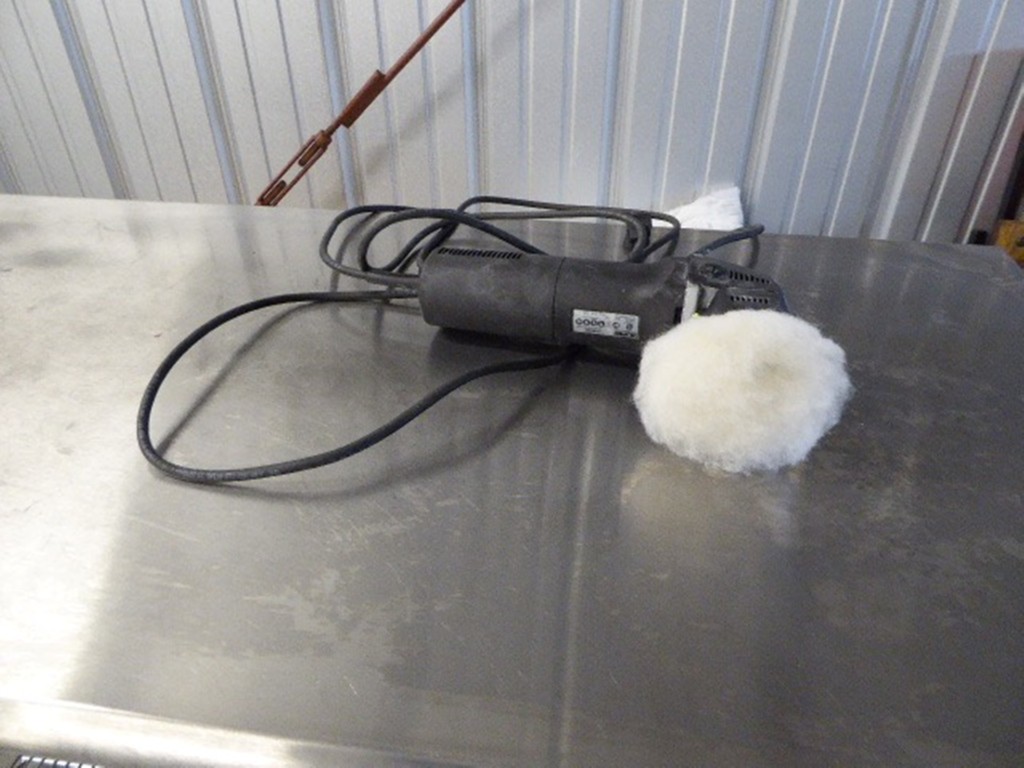 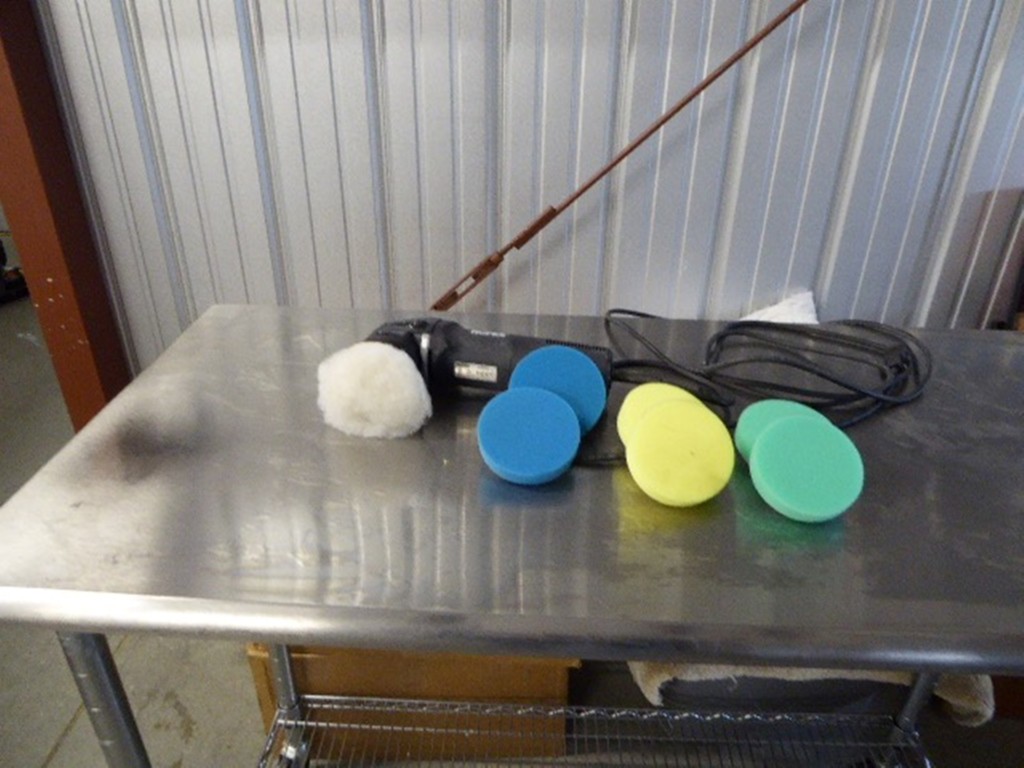 The last of the supplies includes microfiber towels, mineral spirits in a spritzer bottle, masking tape and gloves.  I use these throughout the polishing process. It is also useful to have multiple extension cords if you are using multiple buffers to minimize the hassle of constantly unplugging one buffer and plugging in the other.  Finally, there are situations where it is desirable to protect part of the airplane when  you are working on a hard to reach area.  For example, the leading edge of the wing when you are polishing the middle of the wing.  A few moving pads that are only used for this purpose are quite useful. 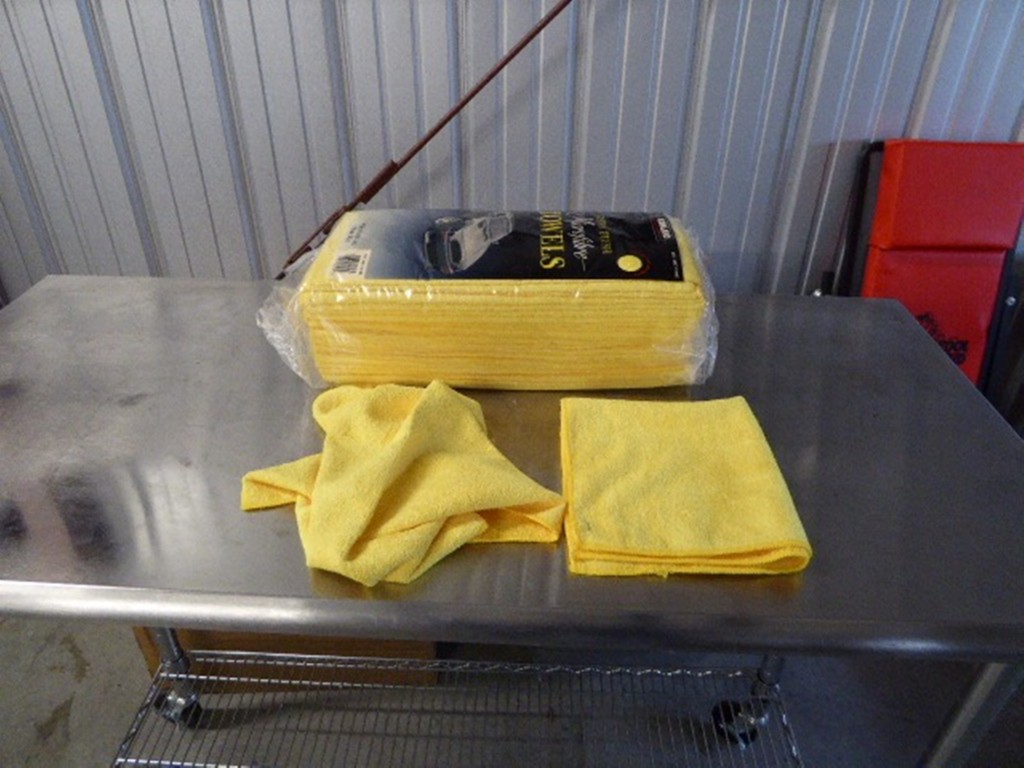 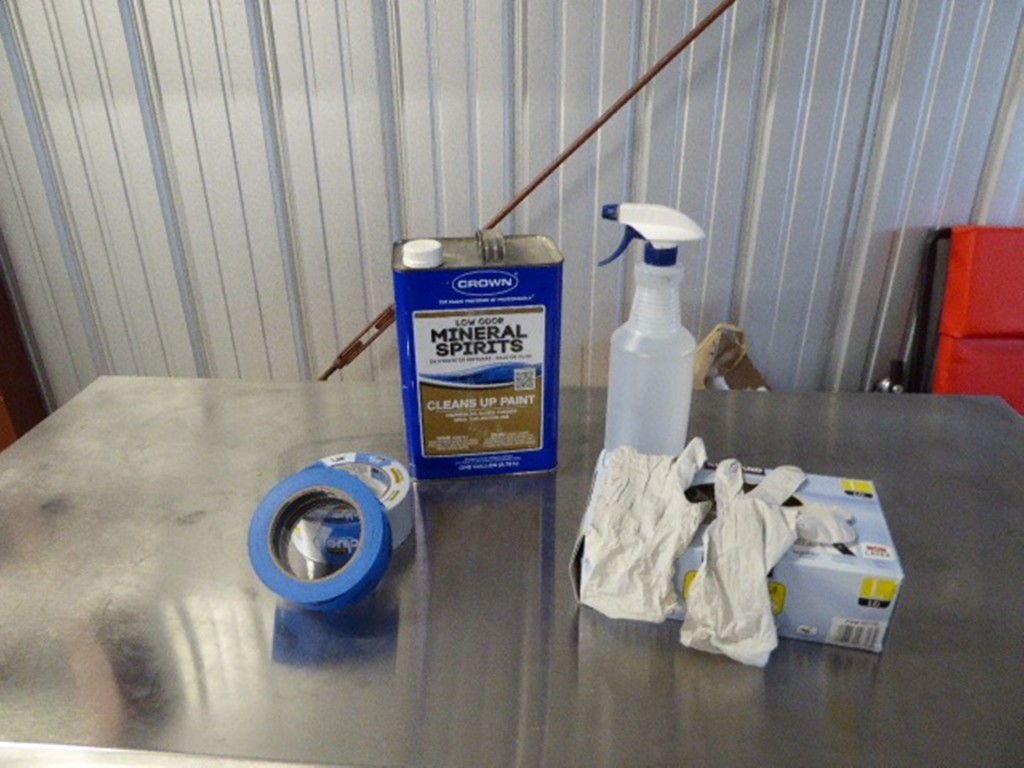 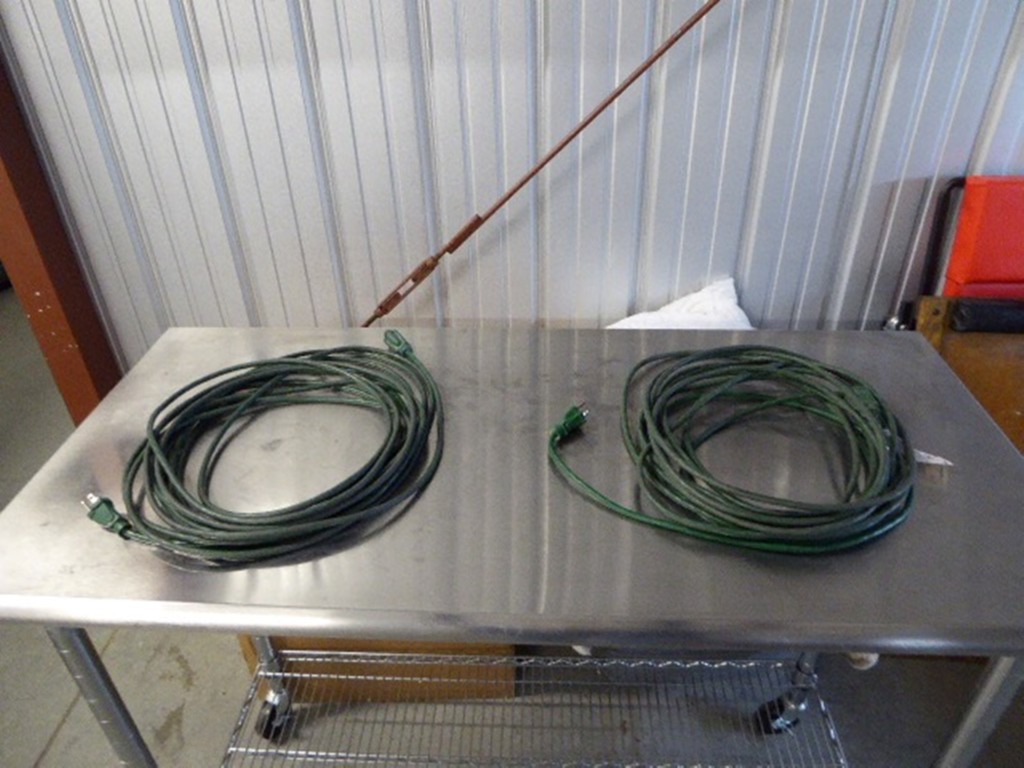 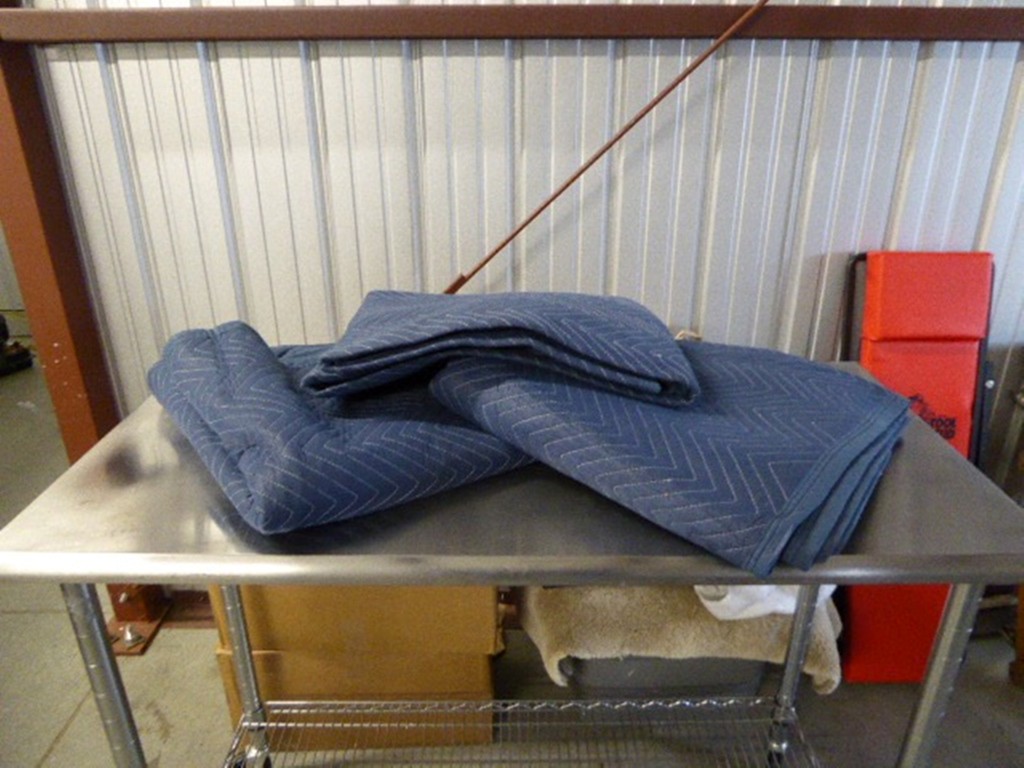 That covers the buffers and buffing supplies, but to actually do the job, there are other essential items that need to be available.  There are many hard to reach areas on an airplane, both high and low. An assortment of ladders, stools and creepers is essential. 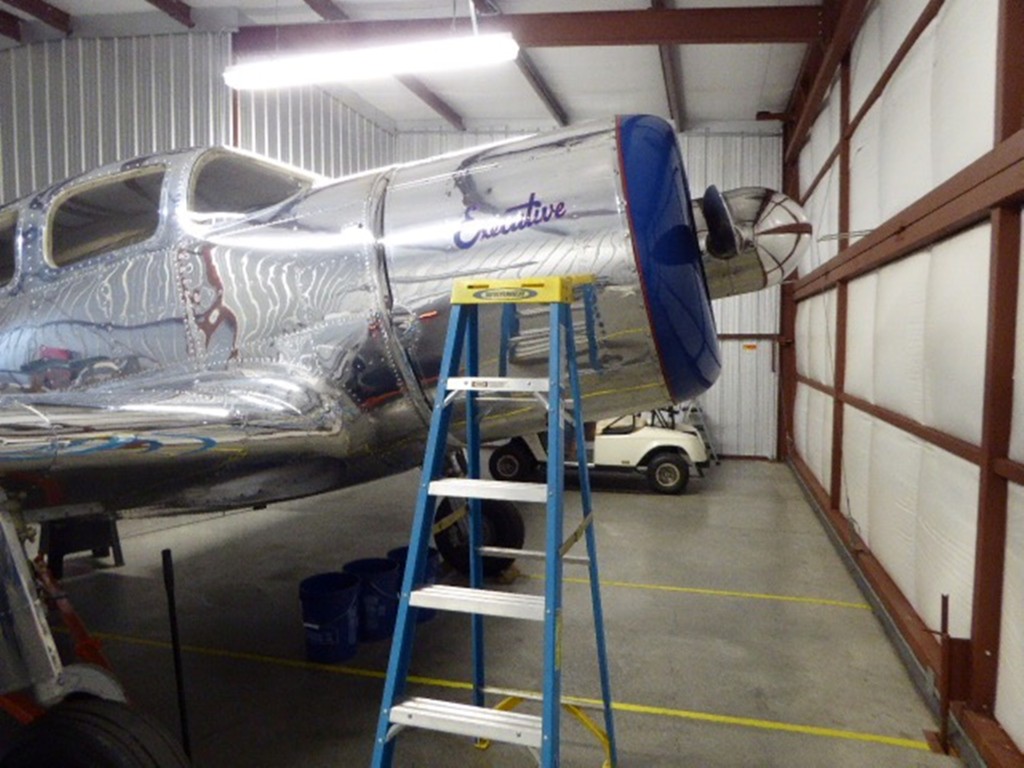 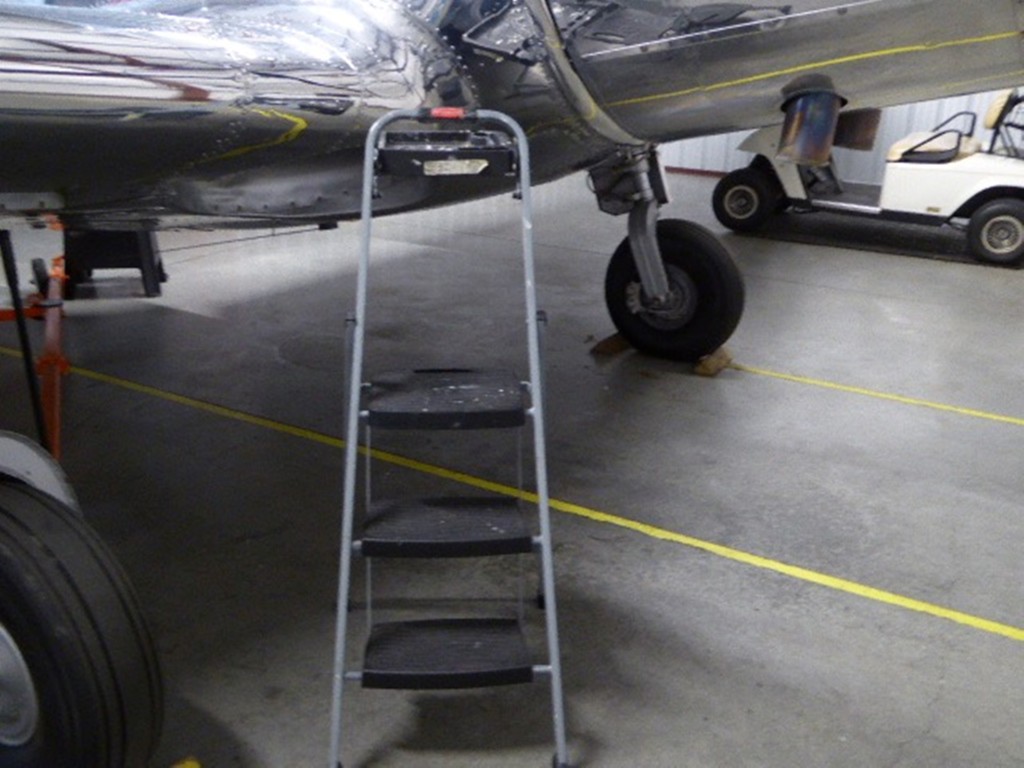 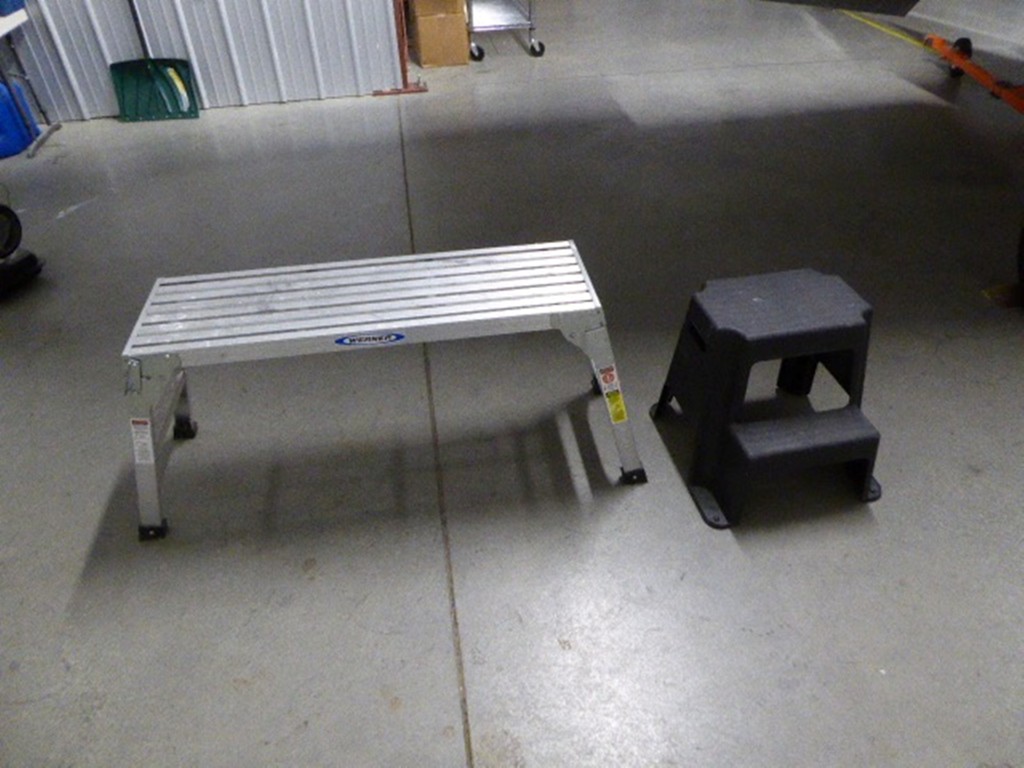 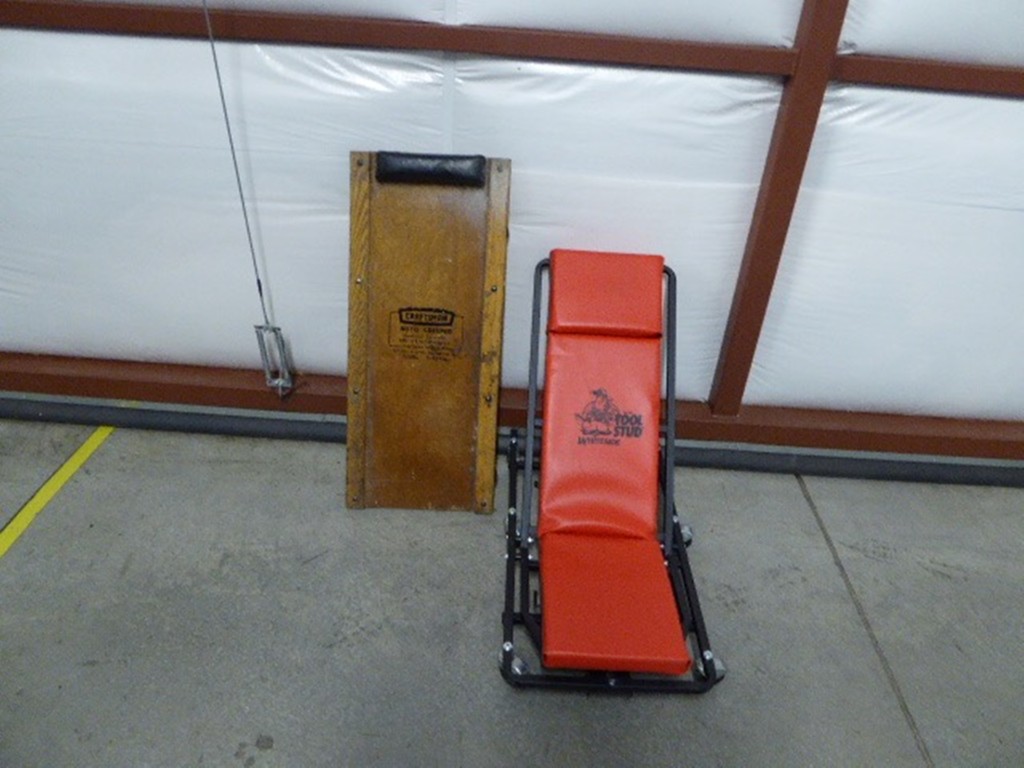