Whenever you pull your polished airplane out of the hangar to attend a multiday airshow, take a bunch of pictures. The reason is simple – – that is the best it is going to look until it is returned to the hangar and is re-polished. The moment you start your engine, everything starts working against you. First is the residue created by the exhaust and if you have a radial engine, oil streaks will inevitably appear.

The flight to the airshow, particularly if it is a long distance from your home airport, will provide additional opportunities for ruining the beautifully polished finish. Smashed bugs are a constant issue, but simply flying for several hours in the bright sunlight also takes its toll. If you are unfortunate enough to encounter a bit of rain, the rate of deterioration is even faster. Once you arrive at the airshow, you will wonder why you even bothered to polish the airplane before the event.

After safely arriving at the airshow, the appearance of your highly polished airplane will continue to deteriorate. The harsh sun and occasional rain showers are ever-present factors. When you get to your airplane early the next morning, you are likely to see it covered with dew as well as a coating of dust. And in spite of the card attached to the propeller that proclaims Look But Don’t Touch, you will almost always find a bunch of fingerprints. I have learned that highly polished airplanes behave like magnets when they are in close proximity to human fingers.

In spite of all the challenges mentioned above, it is possible to somewhat mitigate the deterioration associated with the above factors. When attending an airshow, I carry a “Touchup Kit” consisting of the following items. First, and most important, is a generous supply of microfiber towels. Next are the basic cleaner items: a spritzer bottle of mineral spirits and a can or two of Composiclean View-Polish, a non-ammonia based foaming aircraft windshield cleaner. I also carry a small bottle of an automotive type metal polisher that can be used in direct sunlight. Finally, the kit includes a supply of disposable latex gloves.

Before I describe how I use these products, I should point out that these are field procedures that I would never use at home. I use them solely to make the airplane look as good as possible at the show, but with the full realization the airplane will need to be completely re-polished when it returns home.

Upon arrival, my first priority is to remove the bugs. I spray on a coating of the View-Polish and wipe off with a microfiber towel, then follow up with a second microfiber towel to eliminate any haze that has formed. After the bugs are removed, I next focus on oil and exhaust residue, using mineral spirits and the towels.

If it rains, I dry the airplane thoroughly with microfiber towels before the water has a chance to evaporate. The same is done with the morning dew. Both of these steps are done knowing that I am creating small scratches due to the inevitable dust that is on the metal surface under the rain or dew. Those scratches will need to be removed during the next polishing.

Unfortunately, it is not always possible to dry the water from the rain and dew before it evaporates. If that happens, you will have water spots on the metal surface. If you have a damp microfiber towel, it will often work in eliminating those spots. If it doesn’t work, then they can be removed with the View-Polish. Fingerprints can normally be removed with View-Polish.

That covers all of the items except the automotive type metal polisher that can be used in direct sunlight. I’ve never actually used it at an airshow, but I carry it just in case I’ve made a mess of the surface when using either the mineral spirits to remove oil or the View-Polish when removing water spots or fingerprints.

The following picture shows the contents of my Touchup Kit. 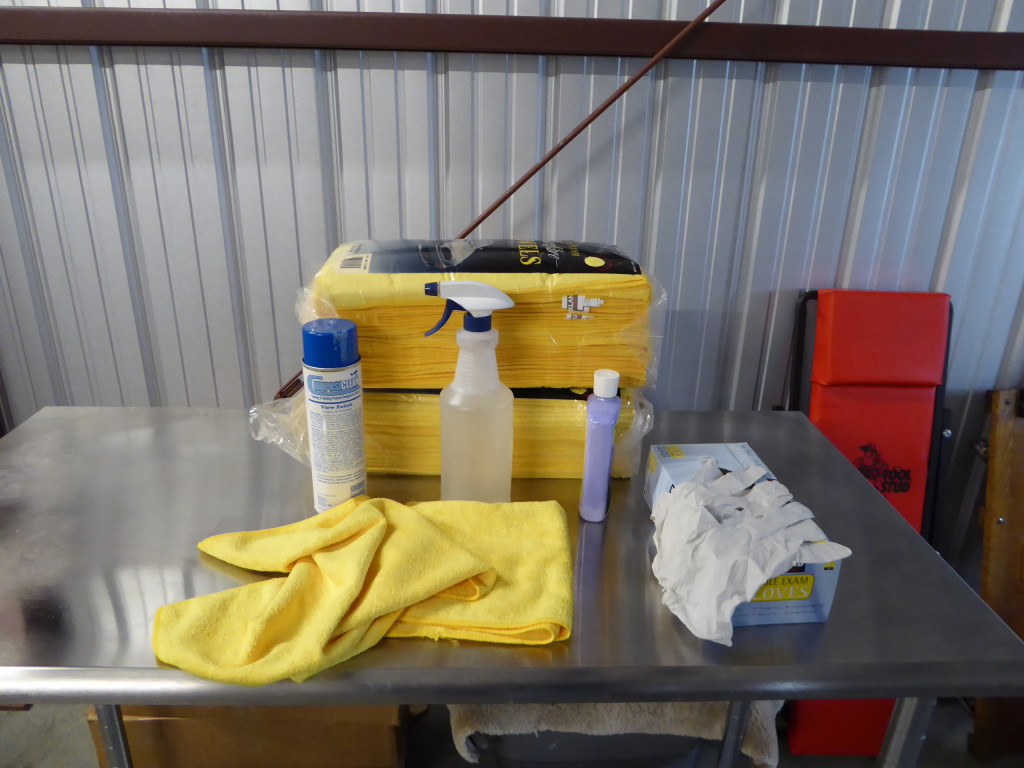